Brendan Hughes (The Dark): An Appreciation

John McAnulty of Ireland’s Socialist Democracy wrote this fine appreciation (below) late last month for Brendan Hughes who died on February 16th. The Dark was a hero to many socialists, Irish Republicans and anti-imperialists around the world. I had the privilege of talking to Brendan several years ago as we were trying to raise money and the profile of the then Irish Republican Writers Group here in the States.

For many years his was the voice I most associated with Irish Republicanism. The videos “Behind the Mask” and “Irish Ways” were rare and eagerly traded films among comrades. There was no possibility of a mass media carrying it. You had to find them at a Noraid, sometimes a leftist, table at a demonstration or fund raiser. Documentaries that had interviews with IRA men and women were nowhere about. Brendan was the most eloquent voice by far in these films from the late Eighties.

My comrade and I took a, rather crazy, 600 mile road trip from Cincinnati via Detroit to New York City for the tenth anniversary of the Hunger Strikes in a cold, wet early May in 1991. Marcella Sands spoke as did George Harrison at, I thought, a rather weakly attended demonstration outside the British Consulate in Manhattan. There was a fund raiser that evening at Paddy Riley’s where Black 47 played and I saw those videos on a lit table. I spent my beer money on those films, though I don’t think I went dry. The days before Youtube.

His presence in the films gave them a weight they otherwise would not have had. His deep, smokers voice retold events so effortlessly and forcefully because he knew and deeply felt the purpose of the story he was telling. That voice will be sorely missed.

A collection of Brendan’s articles at The Blanket from the last eight years and some views on his funeral and ensuing controversy here. A video of Brendan from “Behind the Mask” follows John’s piece. 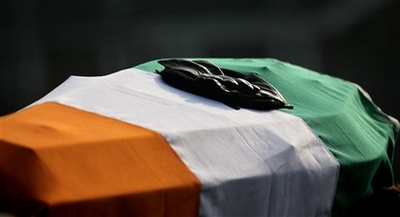 I first met the Dark when I found myself a victim of the ‘internment by remand’ system being operated by the British in the ‘70s. An involuntary guest of the British in Crumlin Road jail, I was undergoing a medical examination on entry when the doors of the cell were flung open and a wing full of republican prisoners made satirical remarks about my naked rear end. I later discovered that the men in white coats had been sent by Brendan and that my initiation was one of a whole series of activities designed to lift morale on the wing.

Even at this time Brendan was a living legend. He was what the IRA would have liked itself to be: burning with hatred of injustice and class oppression, innocent of any sectarian impulse, utterly fearless and utterly dedicated to protecting his volunteers, pursuing the armed struggle, expelling the British and establishing a united Ireland. It made him officer commanding (O/C) of the Belfast brigade, the leader of the first hunger strike and, uniquely, the only republican ever to openly protest the class exploitation of ex-prisoners by the capitalist republicans who employed them at starvation wages.

One thing was evident. Brendan was dedicated not only to the goal, but to the process. Daring firefights with the British were not activities to be engaged in reluctantly but were embraced with fervour as adding sharpness, vigour and meaning to life. This attitude made him an outstanding guerrilla leader, but left him defenceless when conditions changed.

One other memory of my time in the Crum was an attempt to organise Marxist study circles. The first meetings attracted 40 prisoners, but the republican leadership then instructed members to attend lectures on Irish history and language. There was no malice in this. They saw the talks as a distraction that might cause division in the volunteers. In reality the aversion to politics left the republican fighters at the mercy of the more political elements on the Army Council.

My last meetings with the Dark were a series of conferences and meetings exploring the possibility of a political regroupment where he spoke consistently of the need to revive the struggle. I last heard his voice at a conference in Derry where, clearly a dying man, he spoke over a phone link, urging the republicans to unite politically and rebuild resistance.

What was absent from these last meeting was any explanation of what had gone wrong. For him, the armed struggle had had the capacity to bring victory and he could not understand why his movement had decayed.

That was the tragedy of the Dark and of many young people of his generation. They gave everything to a physical force movement that would in the end fail them. The tradition of Connolly socialism had the sympathy of many of them and part of the tragedy was the inability of socialists to respond adequately to the mass movement that blossomed in the North.

Brendan died with dignity, true to the freedom call that awoke his generation. That is something that will be denied to those, his former comrades, who betrayed him.

One comment on “Brendan Hughes (The Dark): An Appreciation”