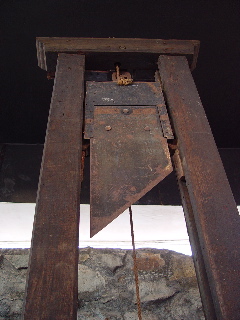 Good riddance to the Nepalese monarchy. While the guillotine may have gone out of style a century ago there are occasions where it ought, in the right hands, to be wheeled back out for an encore performance. In fact I have a few names to add to the set list…

Olmert is trying to stave off the inevitable by making it seem that he is leading the country to “peace”. It wont work. There are too many petty ambitions at play in the small world of the Israeli political elite to allow Olmert to continue. Livni, Barak and Netanyahu all have their eyes on the prize and will twist the knife at the first opportune moment… 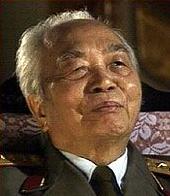 Dien Bien Phu; the words conjure up a whole set of thoughts in my mind.  A man who left an indelible mark on his country and the world in the 20th century turns a hearty 97. He led armies that defeated several imperial legions and toppled the American Empire in Southeast Asia. Vo Nguyen Giap, a son of landless peasants, saw a good deal of his family executed by the French (his sister-in-law by guillotine). He joined the Communist Party in 1939, became Defense Minister in liberated North Vietnam and organized the military defense of Vietnam from US aggression.  For this he has our sincerest gratitude…

The fall of the House of Clinton continues unabated. I have to admit that I am at a loss as to the internal motivations for the Clinton camp to keep going. If they care about the politics they profess, rather than about their “legacy” which is as far as I can tell their one true motivation, they would be over the moon with Obama. Obama has absorbed all of the key elements of the neo-liberal Clinton years and then some. He is the new-New Democrat.

If the empire were smart they would gladly put him forward as the new, post-Bush face. Of course, a Judean peasant would be hard pressed to say that Hadrian was a better emperor than Caligula. And the US empire holds more Judean peasants than the Romans could ever dream of…

Harvey Korman has died at 81. His Hedley Lamarr in Brook’s Blazing Saddles was almost perfect. Call me a little stodgy for 36 but The Carol Burnett show is still one of the best comedy skit shows of all time. Korman and Tim Conway’s constant struggle to keep it together during the more ridiculous moments on the show were golden. I smile thinking about it now. Thanks for the smiles Harvey. Here’s the classic dentist scene between the two…

No I don’t have bloggers bloc (well maybe) – I am just finding the political developments of the last week too depressing to write about- so thought I’d use the long holiday weekend to give birthday salutations to certain musicians who’ve made some of the music that kept me going in one way or another. I never thought Topper would outlast Joe. We all throw a dart when we’re born. Some write like Joe and some have small physical defects in their hearts. Some live like Keith Moon…and live. Topper is still with us and the Clash will never not be. Topper’s drums are often, in this totally lay opinion, way overlooked as a source of the Clash’s power. A nimble Buddy Miles he pounds it out. There’s not enough to say of the Clash so I wont. Here’s Topper slamming into the beginning of Tommy Gun from 1978.

CCR- The greatest American rock band. Fogerty’s singular voice, songcraft and vivid proletarian imagination defined a mythical American South that feels as real and speaks more truthfully than any number of attempts at telling the American story could ever hope to. If songwriting worked like baseball Fogerty hit an unbeatable .900 between 1968 and 70. The list of home runs dominated most of CCR’s catalog with more than a few triples, solid doubles a single or two and never once did they strike out looking. One listen to Effigy (beautifully covered later by Uncle Tupelo) from Willy and the Poor Boys will stand your hair on end as Fogerty takes you on a road trip through an insurrectionary, apocalyptic south. Plantations burning, majorities no longer silent; heavy. CCR with Fortunate Son in 1970. Note to Bruce; class anger isn’t always turned inward or left to fester.

Sun Ra Turns hmmmmm, not sure

Posted by Rustbelt Radical on May 26, 2008
Posted in: Cool, News. Tagged: bday, space is the place, sun ra. Leave a comment

Sun Ra was said to have been born in 1914….but not of this earth and since he was, by his own admission, immortal I include him with the others. Here he and his Arkestra with Don Cherry; I know it’s hard with Sun in the room, but watch Cherry play, fly away in 1983. Exuberant, challenging and otherworldly and liberating Sun Ra might be responsible for more career notes performed than any other musician of his time. He filled the space around him. Space is the Place my friends. Sun Ra cannot die.

Posted by Rustbelt Radical on May 26, 2008
Posted in: Cool, News. Tagged: bday, in the city, paull weller. Leave a comment

In continuing this long holiday weekend’s birthday toasts to great songwriters and musicians- I celebrate Paul Weller’s half century with a version of The Jam’s In The City. The Jam found it hard to translate to American parlance. That’s a shame. I always felt that The Jam (and Weller) had a potential well beyond what they accomplished though they were almost always heads and shoulders above their contemporaries. Who from that generation in Britain is a better songwriter than Weller? “That’s Entertainment” is one of the finest songs I’ve ever heard. In any case, In the City, a fucking great song. And I forgive the Butchers Apron motif. It took a while, but I got over it.

Posted by Rustbelt Radical on May 23, 2008
Posted in: Cool, News. Tagged: bday, dylan, isis. Leave a comment
I came to a high place of darkness and light.
The dividing line ran through the center of town.

In the fall of 2000 as the Al Aqsa Intifada was breaking out I was in New York City. The photos of the Palestinian father shielding his son from bullets were all over the news. We were going to a conference and staying in a little apartment of friends. I was in the the end game of one of the more dysfunctional relationships I have been in and my head was swimming. A show on WBAI played “A Hard Rains Gonna Fall” form the live “Hard Rain” album of the mid-70’s. I described the setting; I can’t describe the emotions that song unleashed in me.

I don’t think of Dylan as political. Sometimes he makes me mad, sometimes his music disappoints, sometimes the blooze rock he can do now grates on my ears. I hate his winking commercials. But mainly I stand slack-jawed at his achievement. He has musical metaphors for emotions we don’t have words for. Not much music changes me. His has. I can’t wait to hear the music he has made in the last decade when I reach the age in which he recorded it.

His music gets way under my skin and, as good old Marat said (or was it Weiss giving voice to Marat?) “there comes a time when you have to pull yourself up by your own hair, turn your skin inside out and look at the world in a whole new way.” Dylan has helped me in that task; as he has countless others.

I haven’t even begun to explore what is an already serious Dylan appreciation. Of course he could produce something so bad next week that I would view it as only slightly more consequential than Scarlett Johanson’s new album. I doubt it, but with Dylan you never know. Happy Birthday Bob. 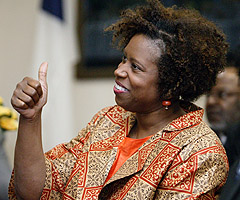 For far too long Black America has been at the mercy of political pimps and usurpers, particularly of the Democratic Party. It is now the year 2008, and we in Black America, in conjunction with our Brown, Red, Yellow, and White sisters and brothers have a genuine and serious choice in order to build a true people’s movement for real systemic change through the “Power to the People” campaign inspired by former U.S. Congresswoman Sister Cynthia McKinney.

Cynthia Mckinney has demonstrated that she wants, and is fighting for, real, systemic change; which is the only change that will address the health care, employment, judicial, and environmental needs of all people.

STEP UP TO THE PLATE NOW

Sister Cynthia is not a corporately sponsored clone like John McCain, Barack, or Hillary Clinton. She is The Real People’s Candidate. Cynthia knows that her campaign is about building the opportunity for a different America; an America that supports and believes in itself and the peoples of the world in a very real sense.

For Sister Cynthia’s campaign to be able to lay the serious organizational foundation that is sorely needed by us all takes money — your money. The nickels, dimes, quarters, and dollars that allow this beautiful and powerful sister to go around this nation with her/OUR message — that we do not have to be, and refuse to be, hostages to what Brother Malcolm X correctly referred to as the “foxes and the wolves” of the Democratic and Republican Parties [i.e. the Republicrats].

Every bit of physical and mental energy as well as every single cent from all of us is needed in this struggle. Cynthia, unlike the candidates of the Democratic and Republican Parties is NOT corporately backed. This means that WE THE PEOPLE must step up to the plate and support her campaign and in so doing — support ourselves!

Sister Cynthia McKinney must be Supported NOW! At stake is literally EVERYTHING. Time to give our dollars to Cynthia’s ‘Power To The People’ Campaign; for it is we the people’s — OUR CAMPAIGN! Do it now my brothers and sisters. Do it Now!

Sister Cynthia McKinney speaks truth to power! She is one of US. She does not pretend that the legacy of slavery is in the past. She makes it clear that jobs, justice, and equality are more important than ever before. She is bold about the fact that Black Liberation is a very important and serious ongoing struggle in the United States of America.

By supporting Cynthia, we support ourselves and our own humanity. We must do this and we must urge our sisters and brother to send every dollar, dime, nickel, and penny to support ourselves — to support the Cynthia McKinney campaign for President. Remember that “the journey of thousand miles begins with the first step”!

ALL POWER TO THE PEOPLE!