The Story Behind a 1920 Communist’s Speech in Ann Arbor

Marxism in Washtenaw County, just west of Detroit, was little more than a novelty before the First World War. Daniel De Leon’s Socialist Labour Party had some supporters, but very little organization. Unions, including the likes of the Knights of Labor, had a long history in the area, but their presence was sporadic. Many of the industrial mills that lined the Huron River were unionized, or at least unionization was attempted, in the 1880s and 1890s. Hundreds of women worked these mills and Ypsilanti’s “factory girls” certainly made their voices heard in those early years.

The Socialist Party was large and organized enough to field slates of candidates at all levels of government in many parts of the state, but not rooted in the working class enough to get many votes. Crucially, Debs was not on the Michigan ballot in a number of elections. 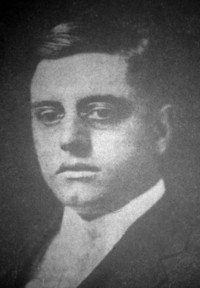 After the cataclysm of the World War and The Russian and other revolutions, many more workers looked to the possibilities of radical transformation as offered by the Bolshevik experience as a new possibility.

The article above, from April, 1920, details a talk given by then Proletarian Party leader, Dennis E. Batt at the Ann Arbor Labor Temple, once at 306 S Main, now a high-end art gallery. Batt was a pioneering American Communist and among the most important early Communists in Michigan.

He spoke on the topic of ‘Marxian Socialism’, which Batt vulgarly describes as essentially; the class struggle, materialist conception of history (which seems something quite different to me from Marx’s ‘historical materialism’) and law of value (labor theory of value). For another speech giving his views during this period see this talk given at Madison Square Garden.

Dennis E. Batt was born in 1886 in Tekonsha, Michigan, the son of a street car conductor and later moved to Detroit before joining the military while still in his teens. After returning from the service, Batt became a tool and die maker in a factory, a trade he would continue throughout his life, and joined the Socialist Party of Michigan where he became an acolyte of John Keracher and the ‘impossibilist’ wing of the Party.

The Michigan Socialist Party, a hotbed of radicals after the war, was expelled by the National SP, like many other Party locals, in 1919. Fights over ‘reform or revolution’ and organizational practices ignited by the Bolshevik Revolution would split the Socialist Party all across the country. A contemporary report of the meeting in which the left-wing under Keracher won the Michigan Party can be found here.

Batt, along with Kerarcher and the bulk of the Michigan SP, had taken strong anti-reform positions; positions which would be considered crazy, ultra-left stuff today.  But hey, the Hapsburgs, Romanovs and Hohenzollern dynasties had all fallen in the previous eighteen months and the red flag had been hoisted over a half-dozen European capitals, so they had reason to be optimistic about the course of revolution. And, of course, the War had finished them for reform.

Batt was named National Secretary of new Communist Party of America and edited The Communist, weekly organ of the Party. At the Chicago of the founding meeting of the CPA, federal officers arrested Batt for sedition on the floor of the meeting.

Batt and others in Michigan rejected going ‘underground’ in response to the Palmer Raids of the CPA and split to form the Proletarian Party of America, with Batt as National Secretary and editor of The Proletarian. He went to Moscow for the Red International of Labor Unions convention in 1921 and attended the 3rd Congress of the Comintern in the failed hope of getting the new PP recognized as a section.

The Proletarian, edited by Dennis Batt.

Later, Batt would be elected to the Executive of the Detroit Federation of Labor and President of Lodge 82 of the Machinists. He also became editor of the DFL’s organ, Detroit Labor News.

Eventually Batt’s position in the unions brought him into conflict with his  comrades in the Proletarian Party and he was expelled in the late 20s, thereafter becoming an increasingly traditional union bureaucrat who, like so many who would gain similar positions, severed his ties to radical politics. The Proletarian Party would soldier on as a Detroit, and later Chicago, based radical party for decades, with areas and occasions of real importance.  Declining by the late 1940s and finally disbanding in 1971, John Kerarcher would serve as leader of the Proletarian Party from 1920 until ill-health forced him to step down in 1954.

During the 1990s Detroit newspaper strike, I had the good fortune and great pleasure of getting to know an old stalwart of the Party, Fred Valle, a barber by trade. We marched together, him in his late 80s or early 90s, with another aged veteran, the SWPs Frank Lovell, at the 1997 Action Mowtown demonstration.  What a pleasure it was to hear these two men reminisce and even engage in friendly redebates of  old contentions on the same streets they did so in the past. I asked questions and soaked it in as we walked in the last great Detroit labor struggle.

Batt was a forerunner, with many of the same strengths and weaknesses, of what became the post-Russian Russian Communist left; the official and the critical. That the offical labor body in Ann Arbor gave Batt their hall to talk to them about Marxism in the midst of the Red Scare says something about his standing in the movement at the time.

Batt’s radicalism was shaped by the great strikes of the 1870s, which would define the world of labor he was born into. Later, as a young man, the intense class war of the first two decades of the twentieth century would seem him actively participate. All of those experiences would be redefned by the events of the World War and the Russian Revolution.

Unions in the area would increase throughout the 1920s, though the campaigns were much more muted and the politics more conservative than those before the war. It was in this period that Batt “sold out”. The Communist Party would only really begin to have influence in Michigan through the rise of the CIO and the UAW in the 1930s, with its multiple crises. Batt would be a bitter rival and object of derision by these new unionists and his former comrades, so much like the Batt of twenty years before.

Even in Washtenaw County, the massive Willow Run Ford factory in Ypsilanti had several separate Communist or radical inspired caucuses in UAW Local 50, including many black auto workers. During World War Two and the era of the Popular Front, the city’s large and energetic Young Communist League was led by a black man, Thomas Dennis. Like Batt, Dennis was also be a union and political leader, but with deep family roots in the freedom struggles of the 19th century.

Also like Batt, he would be arrested for sedition, under the Smith Act, after another World War, but that is for another post.

Speaking On The Tragedy of Gaza

“What is Happening in Palestine is murder on a mass scale,
perpetrated by one of the most powerful states in the world
with the backing of the US, Britain and its allies…”

When: THURSDAY, March 26th at 8pm
Where: Rackham Amphitheatre

Norman Finkelstein, The Israel-Palestine Conflict: what we can learn from Gandhi – 4th floor, Rackham Amphitheater, UM

This internationally renowned scholar and author Norman Finkelstein will speak on the Israel-Palestine conflict.

Norman Finkelstein has authored numerous books and articles on the Israel-Palestine conflict and related issues.

This event is presented by Students Allied for Freedom and Equality (SAFE), Jewish Voice for Peace-Detroit, and American Jews for a Just Peace-Detroit. The Rackham Amphitheater is located on 915 E. Washington St., Ann Arbor, MI 48109-1070.

Workshop 1. The Nuts and Bolts of SP and Coalition Organizing

I. Opening remarks on electoral activity as an organizing tool– Susan Dorazio

III. Major organizing issues of 2008, and how socialist candidates connect with them.

Brian Moore (SP candidate for U.S. President) on the anti-war movement as it can and should relate to socialist principles and platform.

Dwain Reynolds (SPMI candidate for State Board of Education)

Workshop 1. Working with the Peace and Justice Movement

Workshop 2. The Role of Ballot Access in Our Electoral Strategy

Workshop 1. Rescuing Lenin from the Leninists

Workshop 2. Breaking Down Walls: A Look at Immigration Policy in the United States

Workshop 2. Capitalism and the Exploitation of Animals

Workshop 1. Our Agenda, Not Theirs: Socialist Feminist Organizing in the Electoral Arena