Terrence Kellum was an unarmed, black twenty-year-old shot ten times by an Immigration officer serving a warrant with Detroit Police at his home. The march wound through the neighborhood around Chicago and Evergreen where the killing happened. Young, spirited, angry and aware. 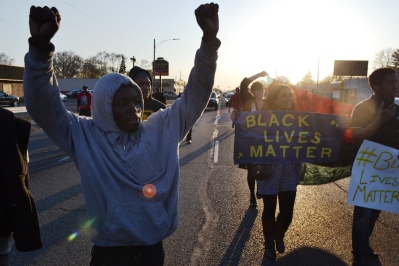 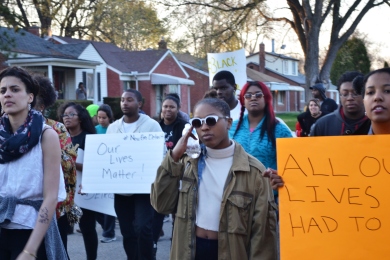 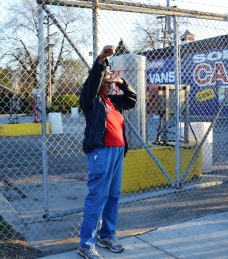 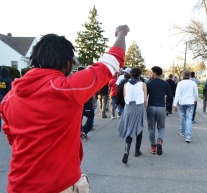 In Photos: Detroit Protests the Israeli Invasion of Gaza 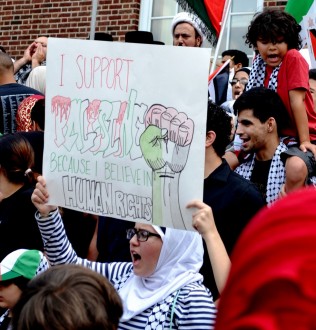 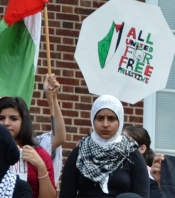 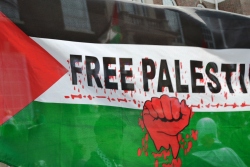 Detroit and the end of the Second Reconstruction

Detroit sits on 20% of the world’s fresh water and has the third largest water supply system in the country, and yet thousands of its people, and the numbers are growing, are being denied access to clean water. If that’s not a damning indictment of the capitalist model, than I don’t know what is.

This water, owned by the citizens of Detroit, provides over 4 million people, largely in the suburbs, with water. You would think it would be considered a huge asset of the city in its renewal. Investing large amounts to find and deal with the many redundant lines, services belonging to abandoned buildings, and other upgrades in order to restore some efficiency so that the city can continue to profit long-term from this unique resource?

Why not do what some places do that, by virtue of living in on the site of a valuable resource, like Norway’s oil, share that wealth in subsidies (or even ‘free’ utilities) and investments in social services for residents?

No, instead it will be chopped up, deunionized, downsized, privatized, speculated upon and thrown like carrion to the vultures.

The current world of capital will not allow for such a resource to stay outside of the market. What it will allow for is a massive state intervention to move public property into private hands and without any compensation. Imagine the howls about ‘freedom’ from these same privateers if the state forcefully took their ill-begotten gains and transferred them to the public commonwealth.

New Detroit chooses to increase rates 9% on rates that are already twice the national average on the people least able to pay ($75 a month when you live on less than $1000 is simply a hardship). And then, turn off the spigot on the poorest and most vulnerable; those behind for the measly amount of $150, or as also happened in many cases—those in good standing.

But what’s not necessary to those deals are all the black, and mostly poor, people who make up eighty-something percent of the Detroit’s population. More than unnecessary, they are an impediment to land values and real estate speculation and must be removed. Then the real ‘development’ can commence.

Remember when we learned about the end of Reconstruction, the introduction of share cropping, the end of black elected officials and the rise of Jim Crow? The promises of the Civil War and Reconstruction betrayed and abandoned?  Well, I think we are looking at something analogous here now.

In the period after the Civil Rights movement a degree of black political power was won and exercised, a first since Reconstruction; this time, instead of in the local and state governments of the defeated South, it was in the mainly large, northern industrial, urban centers, backed up by municipal and other unions, that black folks held a modicum of autonomy and social power.

With the disenfranchisement of a majority of Michigan’s black citizens, privatization of city services and schools, the ‘Right to Work’ enactments and the end of manufacturing and with it, hope at bettering your position through work, we can add what amounts to forced removal of unwanted population from those cities, so that the land might be more profitably exploited.

Black people have been systematically stripped of the gains made in the previous struggle. As well, the social positions from which to defend those gains, like unions and municipal controls, have been decimated.

The era of Civil Rights is long over. In many ways, it has been defeated. It is the end of the Second Reconstruction we are living through now; in our cities, before our eyes. This time in the era of neo-liberalism, and of the first black President.

Here is an essential talk from Glen Ford from this week giving some background and context on this process. Racialized capitalism as agent of renewal is a disaster for black, brown and poor people.

May Day in Detroit

Posted by Rustbelt Radical on May 2, 2012
Posted in: Event. Tagged: detroit, may day. 1 Comment

Here are a bunch of photos from yesterday’s kick off of Detroit’s May Day events at Clark Park in southwest Detroit.
‘We have been naught, we shall be all!’

Here is a slide show of photos I took at Monday’s MLK Day rally and march in Detroit. Veteran women SNCC freedom fighters were honored at the rally held at the historic Central United Methodist church. Occupy Detroit also received recognition and a standing ovation. A march followed which included a well attended socialist contingent. Later in the day folks from Detroit and around the state marched on Governor Snyder’s mansion in the hills above Ann Arbor to protest the states assault on local black government through corporate ‘Emergency Managers’ . That part of the county has probably never seen so many people of color. Despite the gloomy January skies, the weather was surprisingly warm for a Michigan winter. It was a joy to bring a little of the class war to the doorsteps of white, ruling class power in Michigan. A good day.

It is suggested that readers hum along to Joe McPhee’s 1970 fire storm ‘Nation Time’ as a musical accompaniment to the photos below. ‘What time is it?’

Like so many activists of generations past I ended up in Detroit to involve myself in important workers struggles. I didn’t consciously do it and it has only been recently that I have realized the footsteps I followed to the place.  While there are plenty of locally raised Detroit leftists, many of my comrades were and are folks who had been radicalized somewhere else and came to Detroit to put a little theory into practice. From this generation to mine and from the 60s folks who came to Detroit, a citadel of the black and workers (and black workers) movement and of working class culture, often from college campuses to factories or trades. Those comrades followed a generation, some of whom I knew well, now almost entirely passed who came to Detroit radicalized by the struggles of the 1930s. I had been coming to Detroit since the summer of 1990, but it was the Detroit Newspaper strike that began in July, 1995 that drew me there to live.

I lived in Detroit for years, most of the time on Fourth Street just north of Wayne State and working at one of the last grocery stores in the city where I was a union steward. Rosa Parks was a costumer, or Mother Parks as she was called, and I can say I’ve seen the icon buying cereal. Since leaving Detroit for a slightly quieter life (the city was not, in those days before urban farming, generally conducive to healthy living) I have lived in its orbit, politically, socially and culturally. I’ve developed a pretty conflicted, but deeply respectful relationship with the city. Have I got Detroit stories. Loads of them. And the stories I don’t remember are probably better, even if more embarrassing. One thing is for certain; despite claims to the contrary, Detroit is very much alive and always has been, even if often a tough place to live.

One of the people I met pretty early in my Detroit years was Brad Duncan. We met on the steps of Zoots Coffee on Second (anyone who knew Zoots misses it). If I remember correctly we were talking about the Irish hunger strikes before were even introduced. Brad would later become a guide for much of Detroit’s offerings; music, history, food and more. Brad recently moved to the East Coast and the current issue of Critical Moment, an essential Detroit activist publication, carries a photo essay from him called ‘Love Letter from Detroit’. CM describes Brad as ‘a political activist and freelance journalist who was first politicized by the Detroit Newspaper Strike (1995) as a teenager. His radio commentaries on the crossroads of music and radical social change movements can be heard on KBOO (Portland, OR). He lives in Philadelphia, PA and can be reached at Palestinelives@hotmail.com.’

Brad said “I want these photos of Detroit to be the exact opposite of the ‘ruin porn’ image we always see of Detroit.  I don’t think Detroit is pathetic or dead.  For starters, I think Detroit is a city with a rich history of fighting for workers rights, fighting against racism, and creating some of the best music of all time. I was moving out of Detroit after many years and  wanted to capture some of the city’s classic (to me) images.  I wanted to show Detroit to my friends around the world, and to have some images to remind me of the city while I’m away.” Brad sent the Rustbelt a slew of other photos, the slide show below, and promises to answer questions readers might have about them.

We all have sounds we associate with places. One of the sounds I associate with Detroit is Faruq Z. Bey and the Northwoods Improvisers. Readers are requested to listen to the above as an accompaniment to photos. I think they work well together. Whether you know Detroit or not, comrades are sure to enjoy them as much as I have.

Here are some photos I took of today’s Martin Luther King Day March for Jobs, Peace and Justice in Detroit.  From the Central United Methodist Church down Woodward to Jefferson and back in the Michigan cold, kept warm by chanting.  The numbers seemed to be a little down this year, but the spirit still very much alive.  A Socialist Contingent organized for the march had 40 or so along.

Detroit: On The March To The USSF

Just a few snaps of this afternoon’s march to Cobo Hall in Detroit opening the Social Forum.  The energy of the march was wonderful, I am no good at numbers, but the consensus of those I was with put the number at around 5,000 (over ten thousand pre-registered).  I ended up behind a contingent of young Jewish radicals for part of the march; the chant: “We’re Jews! We’re pissed! We are anti-Zionists!”  Within minutes of arriving I saw comrades I hadn’t seen in far too long (why yes, those are gray hairs), and the minutes following brought many more such happy reunions.  I’ll be at the Forum in and out and solidly come Friday, will have more as the week develops. 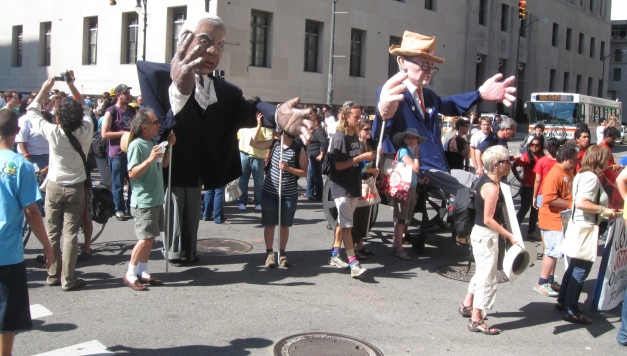 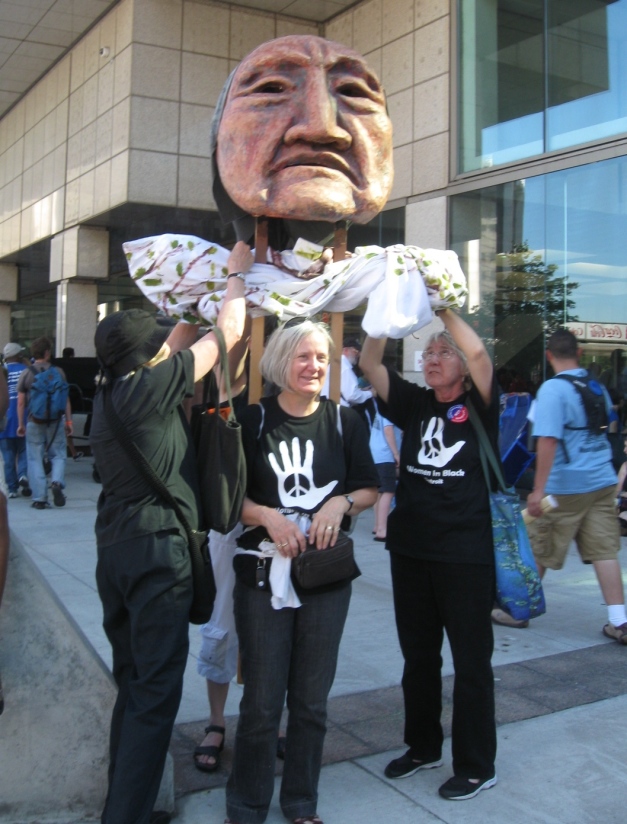