Crisis, over production and credit

I am currently reading Francis Wheen’s Marx’s Das Kapital: A Biography. It has strengths and weaknesses.  It is rich in character and sense of time and place.  Some of the books’ weaknesses are pretty profound. There are plenty of good Marxist reviews out there. Google them.

I would like to propose, for future reference, that you cannot write about Lenin unless you have actually read Lenin…and in context.  Lenin’s politics were the opposite of haughty elitism; one can not say that of most of his detractors.  I have a feeling that people will turn once again to Lenin as they seem to have started towards Marx as the workers’ movement finds its feet and reorients itself to power and its consequences.  The vistas opened up by State and Revolution, for example, are as emancipatory as any in Marx and Engels.  We will come to need our Lenin again; the experience of him and his generation is too rich in lessons, both negative and positive, for us to ignore.   Why would we wish too?

Still, this thin, welcome, volume is a nice introduction to the character and formation of Marx’s masterpiece. For an introduction into what Das Kapital actually says I recommend Mandel’s Introduction to Volume I in the Penguin Edition.

One of the finest Marxist economists of the 20th Century was Ernest Mandel. His studies and work rightly gained him enormous influence in the New Left and beyond. He never lost sight of certain central propositions of Marx that others, including accomplished Marxists, did. This anchor allowed him to go further than many in developing new ideas in the materialist approach to economy. He is miles ahead of Wheen in getting this stuff because, unlike Wheen, Mandel was a revolutionary. As such he understood the dialectic of learning includes action.

Here Mandel comments on the origins of capitalism’s routine and violent crises. It is entirely relevant, even necessary, for us to absorb and educate ourselves anew on these issues. I have been trying over the last years to make a determined study of Marx’s economic writings. It’s my conviction that the revolutionary left ought to spend a good deal more time than it does explaining just how capitalism works. To paraphrase the increasingly whacked, formerly Maoist now strictly cult of Avakian: “Marx Now, More than Ever”

So a little Ernest on this rainy Tuesday morning…. 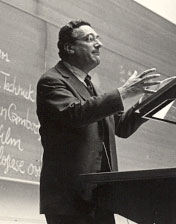 “The ups and downs of the rate of profit during the business cycle do not reflect only the gyrations of the output/disposable income relation; or of the ‘organic composition of capital’. They also express the varying correlation of forces between the major contending classes of bourgeois society, in the first place the short-term fluctuations of the rate of surplus-value reflecting major victories or defeats of the working class in trying to uplift or defend its standard of living and its working conditions. Technological progress and labour organisation ‘rationalisations’ are capital’s weapons for neutralizing the effects of these fluctuations on the average rate of profit and on the rate of capital accumulation.

“In general, Marx rejected any idea that the working class (or the unions) ‘cause’ the crisis by ‘excessive wage demands’. He would recognise that under conditions of overheating and ‘full employment’, real wages generally increase, but the rate of surplus-value can simultaneously increase too. It can, however, not increase in the same proportion as the organic composition of capital. Hence the decline of the average rate of profit. Hence the crisis.

“But if real wages do not increase in times of boom, and as they unavoidably decrease in times of depression, the average level of wages during the cycle in its totality would be such as to cause even larger overproduction of wage goods, which would induce an even stronger collapse of investment at the height of the cycle, and in no way help to avoid the crisis.

“Marx energetically rejected any idea that capitalist production, while it appears as ‘production for production’s sake’, can really emancipate itself from dependence on ‘final consumption’ …. While capitalist technology implies indeed a more and more ‘roundabout-way-of-production’, and a relative shift of resources from department II to department I (that is what the ‘growing organic composition of capital’ really means, after all), it can never develop the productive capacity of department I without developing in the medium and long-term the productive capacity of department II too, admittedly at a slower pace and in a lesser proportion. So any medium or long-term contraction of final consumption, or final consumers’ purchasing power, increases instead of eliminates the causes of the crisis….

“Marx visualised the business cycle as intimately intertwined with a credit cycle, which can acquire a relative autonomy in relation to what occurs in production properly speaking. An (over) expansion of credit can enable the capitalist system to sell temporarily more goods that the sum of real incomes created in current production plus past savings could buy. Likewise, credit (over) expansion can enable them to invest temporarily more capital than really accumulated surplus-value … would have enabled them to invest (the first part of the formula refers to net investments; the second to gross investment).

“But all this is only true temporarily. In the longer run, debts must be paid; and they are not automatically paid through the results of expanded output and income made possible by credit expansion. Hence the risk of a Krach, of a credit or banking crisis, adding fuel to the mass of explosives which cause the crisis of overproduction.”

A relatively recent DVD has been released of and about the late Mandel. I recommend it highly. It can be ordered from the States and our colder (and warmer) neighbors to the North at: