“…they were willing to die for freedom” 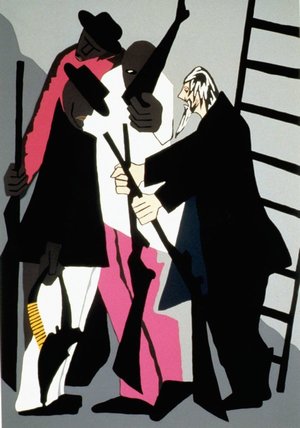 To commemorate the 150th anniversary of John Brown’s assault on Harper’s Ferry and his and his co-conspirators subsequent execution this blog is going to present some hard to find accounts, eulogies, thoughts and song of Brown and his cause over the course of the next six months.  We start today with Langston Hughes.  Langston Hughes had a real connection with Brown.  His maternal grandmother, Mary Patterson, was married to Lewis Leary who was a combatant with Brown and died at Harper’s Ferry. Her second husband, Charles Henry Langston, was the brother of Ohio abolitionist and comrade of Brown, John Mercer Langston.

Hughes was born in eastern Missouri in 1902 spending most of his childhood being reared in a town synonymous with the free soil and abolitionist cause Lawrence, Kansas (a site dedicated to Hughes in Lawrence here).  Lawrence was defended by Brown and his sons during the “Bleeding Kansas” war of the mid-1850’s.  Later the town would be razed to the ground and hundreds of its residents killed by Quantrill’s Confederate raiders in 1863.

Hughes, like many black intellectuals and workers, was drawn to the Communist movement in the 1930’s.  He was active in defending the “Scotsboro Boys”, traveled to Spain during its Civil War as a correspondent for the black press joining the John Reed Clubs.  He would distance himself from the movement in the post-war Red Scare, much to the dismay of his erstwhile comrades.

Hughes dedicated his weekly column in the Chicago Defender, an historic black newspaper that still publishes, on October 17, 1959 to the 100th anniversary of the raid and the martyrdom of Brown and his comrades.  The country was then witnessing the growth of the Civil Rights movement and Brown’s spectre haunted North and South alike.  Here is his article: 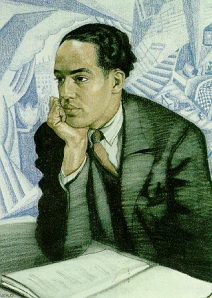 “Just as the War for Independence that freed America from English domination actually commenced with the death of the Negro, Crispus Attucks, in 1770, and the Boston Tea Party in 1773, so the Civil War that freed the slaves really began with John Brown’s raid.

“At that point, however, there was yet no formal declaration of war between the states.  But the first shot had been fired, the first blood shed, and both whites and Negroes died on the banks of the Potomac for the sake of freedom.

“Frederick Douglass, Harriet Tubman, Sojourner Truth and many other brave black men and women had already escaped from slavery into the North, but many thousands still remained in bondage.

“It occurred to old John Brown, who had already fought for freedom in Kansas, that armed revolt might be precipitated in one place and from there spread throughout the slave population of the South.

“With this thought in mind, Brown gathered together a secret band of 21 faithful followers, Negro and white, and planned to seize by force the Federal arsenal at Harper’s Ferry and then rally to his cause the slaves of Virginia and surrounding states.

“In John Brown’s party there were five Negroes.  Dangerfield Newby, a freed slave, wanted to free his wife and seven children still held in bondage.  Shields Green had learned of freedom from Frederick Douglass and left Douglass to join John Brown.

“From their college classes at Oberlin had come young Lewis Sheridan Leary and John Armstrong Anderson.  And Osborne Perry Anderson, a printer, had come from Pennsylvania.  These men knew that they might never see their families again.  And they did not tell their loved ones where they were going when they left home, or what they intended to do.  But they were willing to die for freedom.

“On the night of Sunday, Oct. 16, 1859, John Brown, his sons, and his little band of dedicated men successfully attacked and captured the arsenal full of arms at Harper’s Ferry.  But the massed might of the Federal government was called out against them.  At Washington President Buchanan ordered the marines and cavalry into action.

“Hundreds of troops under the leadership of no less a personage than Col. Robert E. Lee, moved into action against Brown’s little band.  Brown was of course defeated, taken prisoner, and hanged on the gallows as were John Copeland and Shields Green.  Of the other men of color, Sheridan Leary and Dangerfield Newby were slain in the early fighting.  But Osborne Anderson escaped to fight again later in the Civil War.  Brown’s two sons were killed and he himself was wounded.

“But he lived to march erect up the steps of the gallows on which the government had sentenced him to die on Dec. 2, 1859, a little less than two years before the Civil War, which was to accomplish what Brown’s objectives began.

“John Brown’s name is one of the great martyr names of all history and the men who fought with him rank high on the scrolls of freedom.  Even today, the old Civil War song repeats,  ‘John Brown’s Body lies a-mouldering in the grave, but his soul goes marching on.’  When Brown was captured, he said, ‘You may dispose of me very easily, but this question is still to be solved- this Negro question, I mean- the end of that is not yet.’

“Ralph Waldo Emerson called him a ‘new saint who will make the gallows glorious like the cross.’ And when he died, the great Negro leader, Douglass, said of Brown, ‘To his own soul he was right, and neither ‘principalities nor powers, life nor death, things present nor things to come,’ could shake his dauntless spirit or move him from his ground.’

“This month marks one hundred years since John Brown struck his blow for freedom.  On Oct. 15, 16, 17 and 18 the town pf Harper’s Ferry, West Virginia, is commemorating John Brown’s raid with a re-enactment of the storming of the arsenal, with a pageant, “The Prophet,” and an exhibition including photographs of the 21 men who followed Brown.

“I hope that a great many Afro-Americans will attend this commemoration.  Those of us who cannot attend will remember with reverence this white man, John Brown, who laid down his life that his brothers might be free.”

The 150th anniversary is this year and many events are being held to commemorate the moment and rededicate the cause.  In the next of the series we’ll take a look at John Brown in song.